I've decided to move all of my future technology-based articles to my developer-oriented blog, and I am shifting the focus of this blog to exclusively personal topics.

I created a blog called Between Two Commits with my friend Hamish Macpherson. It's been online for about a year, and we've been (slowly) building up content for it. We're still pretty open about what its niche or soul will be, but one thing that is certain is that it's developer-oriented. So far, we have articles about side projects, tutorials, and I've moved "The Hamish and Brandon Show" there, with the intention of relaunching it as the "Between Two Commits Podcast". 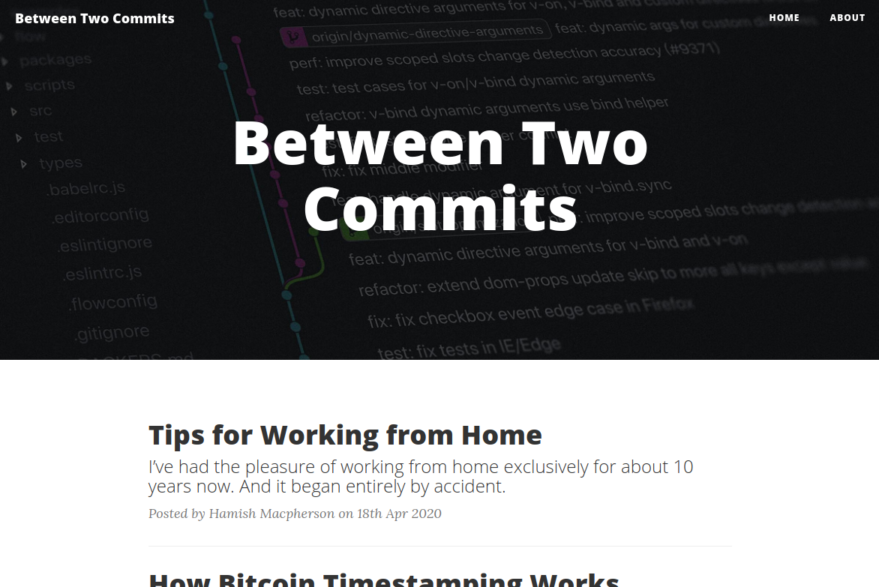 The name actually came from one of the episodes that we recorded. One of us said it, the other recognized it as a potential cool name for our site, which we already had in the works at the time. I really like it. All developers are technically between two commits (unless they haven't started!), and everything happens in that interval: coding, debugging, learning and training, and time off. It also metaphorically represents the two of us as we exchange during the podcast.

While still just a side project - and it may always be - we have lots that we want to do with B2C. We both have lists of articles we want to write for it, and topics for the podcast. I would like to have a "side project showcase" of some sort. We might also want to have guest writers.

All of this means that the purpose for which this blog has been created has run its course - in a very positive way. My goal was to have an outlet to share with the world - as a software developer - what I'm working on, what interests me, and what my journey is like. All this now has a more suitable home, which I also get to share with a fellow developer - hopefully more in the future.

So I am shifting the focus of this blog to be of a more personal nature. If, from time to time, I have a thought on a technical issue that is too small or otherwise inappropriate for B2C, I'll include it here instead. Aside from that, however, the posts here will be about anything except programming. Things that happen in my life, things that I've done, things that I hope to accomplish... the usual blog stuff. I'm often very guarded about my opinions, but if I share them, it will probably be here. My first personal blog was created in 2006. I've been an avid journal-keeper ever since, but the public-facing side of that has waned in recent years. I'm glad that this site gives me an opportunity to change that.

If you've ever read my blog and have been interested in the programming stuff, check out https://betweentwocommits.com. If you're here for updates on me, read on. In any case, thanks for stopping by.